The famous Thanksgiving side that's virtually a dessert! The smooth creamy soufflÃ© that is the base coupled with Â the crispy, nutty, buttery topping in this recipe are pure luxury in a spoon! Sweet potatoes are a staple in the Southern United States of America where I live and have been for decades. Originally a tuberous root from modern Peru, it is believed that the plant has been grown in the US since the mid 17th Century. The warm and humid climate of the South makes it the perfect breeding ground for the vegetable that is now increasingly popular in the entire country.

Similar to Yams, originally the sweet potatoes of Thanksgiving were diced and cooked in a sweet glaze, even going so far as to being mass produced and marketed in cans as "Candied Yams". The concept of a casserole has actually only been around for about 100 years and interestingly enough the first such recipe was developed as part of a sales and marketing strategy by the producer of marshmallows. The first mass produced marshmallows became available in the early 1900's, produced and sold by "Angelus Marshmallows". Â As perÂ smithsonianmag.com the owner of the company got the founder of the then popular "Boston Cooking School Magazine" to develop recipes using marshmallows to help increase sales. The 1917 Boston Cooking School Cookbook published the first sweet potato casserole recipe with marshmallows and the rest is history.

Here in the South, I've grown to like and love the variation of the casserole with a crunchy streusel topping. Featured as a side dish at restaurants such as Ruth's Chris Steakhouse and Half Shell Oyster House, this is a recipe you don't want to miss. Very easy to make and prep ahead of time, you will definitely want this more often than just on Thanksgiving. The only downside to this recipe is that you'll end up eating too much of it!

A quick minute under the broiler or if you have a blow torch, a quick brÃ»lÃ©e at the end works great to brown the top and give that caramelized taste and texture to the casserole.

Some people even add the Streusel topping and some marshmallows at the end. Let your imagination run wild! You might just come up with the next Thanksgiving sensation!

DIRECTIONS:
1. Peel and cube potatoes to boil. Cutting them helps them cook quicker and more evenly. Make sure the water in the pot fully covers the potatoes to insure optimal cooking. 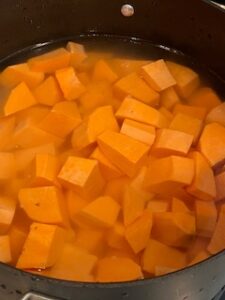 2. The potatoes are done when you can slide a knife in easily. At this point strain them and discard the water. Let them sit for 2 minutes to make sure all the water has completely drained. 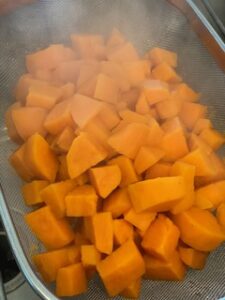 3. Add all of the ingredients except the eggs and mash well to incorporate. 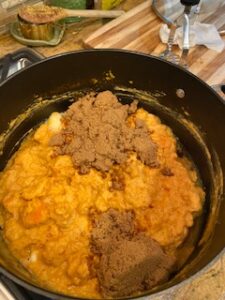 4. Beat the eggs and add them in only once the potatoes are lukewarm as you don't want the eggs to cook and scramble. 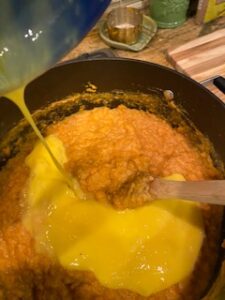 Your mixture will be a little runny at this point but will set as it bakes to a soft soufflÃ© like consistency. If you like your potatoes more dense then reduce the liquid to ¼ cup. 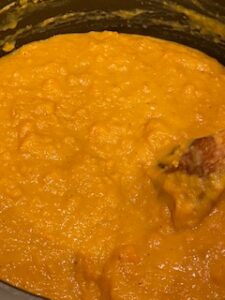 The mixture will darken a little due to the addition of the brown sugar. 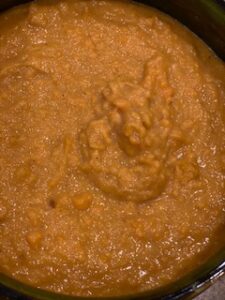 Preheat oven at 350 degrees and prepare the Streusel Topping.

DIRECTIONS:
1. Toss the Pecans in the flour, sugar and cinnamon and pour the melted butter in the mixture, stirring and tossing till a crumble forms. 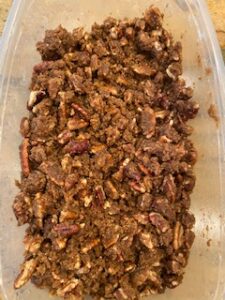 2. Pour the mashed potato mixture in an oven safe baking dish and sprinkle a dense layer of the topping. 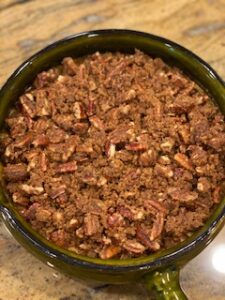 3. Bake for 30 minutes. During this time the potatoes will set and the topping will crisp up. 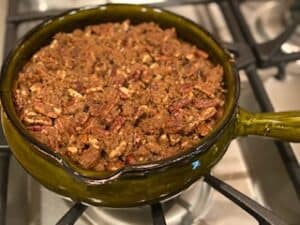 NOTE:
If freezing, follow all of the steps but keep the Streusel topping separate. Freeze as shown below and sprinkle on the potatoes just before baking as it can get soggy if added to the potatoes beforehand. 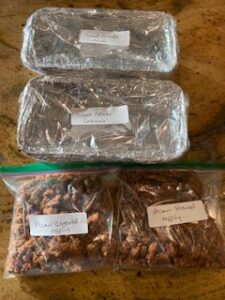