Chicken Mulligatawny Soup! Now that's a tongue twister and a mouthful! A soup of Tamil origin, called Millagu (pepper) Thanni (water), as per lovefood.com it was originally consumed by the poor in Sri Lanka. Thin, watery and bland, the original is a far cry from the thick rich version being presented in this recipe.

Soups have historically not been a part of South Asian Cuisine. However, during the time of the British Raj, the Expatriates of the East India Company wanted a soup to be served at dinner. Indian cooks took the Tamil pepper water and recreated Mulligatawny Soup. A creamy and dense soup thickened with lentils and rice and seasoned with traditional Indian spices, Mulligatawny Soup definitely has a unique taste.

As the expatriates living in India took the recipe back to their homeland the soup gained popularity in Britain. In 1810, immigrant Dean Mahomed opened The Hindostanee Coffee-House in London. Per livehistoryindia.com there was Mulligatawny Soup on the menu at the establishment that the nobility at the time frequented.

By the 19th Century the soup was a household feature in Great Britain. The Heinz company was selling tins of the soup in grocery stores and Mulligatawny soup was more popular here than in India.

With the passage of time there were many variations of the soup. Assorted Meats, vegetables and at times even apples were added to the stock. Heavy whipping cream and sour cream were sometimes used in place of coconut milk to finish the soup off at the end. Even today, if you search for the recipe you'll find that each one is different.

By now you've probably figured out that I love lentils! Check out my dhaba style maash daal and my hyderabadi khatti (sour) daal (lentils) if you haven't already! Keeping in mind all of my healthy eating resolutions I thought cooking lentils was a great way to kickstart 2021!

My favorite version of this soup is one I ate weekly at Sindh Club. The British left Pakistan with Chicken Mulligatawny Soup and the concept of Clubs. The equivalent of a country club in America; with a gym, swimming pool, library and restaurant, these clubs are where the old and young in Pakistan socialize.

My family had weekly Sunday dinner at Sind Club and I always (and I mean always) ordered the Chicken Mulligatawny Soup. I often crave this soup but unfortunately it isn't something that's easily available where I live. I've spent years trying to perfect this recipe and get it as close as I can to the one of my childhood.

Per my husband, at who's request I recently made the soup, I almost have the recipe down! Apart from getting a first hand tutorial from the chef at Sind Club, this is as close as I think I'll get so in my book the recipes a keeper! I hope you like it as much as I do!

I think the main thing that makes or breaks a good Mulligatawny Soup is the lentils you use. Each type of lentil is delicious (and there are so many) but in this soup, after trial and error the split pigeon peas are undeniably the way to go!

Most recipes say to use red lentils but I just didn't get that dense texture that I remember the soup at Sind Club had with those so experimented till I found the perfect ones!

The spices in this recipe are not supposed to make the soup spicy but just fragrant. The curry powder is a must! Luckily it's available at most grocery stores now a days! I got a Madras Hot Curry Powder from my local Walmart but any type will work.

Similarly, the Bay Leaves add a great fragrance to the soup but do remember to pluck them out at the end as they won't blend properly at the puree stage. Since the curry leaves are very tender and blend well you can leave them in.

Cooking the actual soup is fairly simple as illustrated below:

Heat the oil and sauté the onions, ginger, garlic and chillies.

Add all your ingredients to make your soup. As it starts to thicken will absorb the color of the lentils and spices as shown below.

Puree the soup and add the coconut milk to give it a smooth creamy finish and don't forget your toppings! 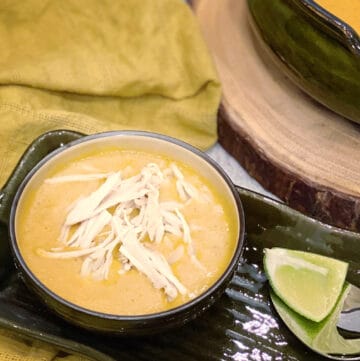 Add the Basmati Rice to the soup separately at two different stages :

2. Cook and add the other 4 tablespoons to the stock at the time of cooking to help thicken the soup.