The first ever Holiday Chex Mix was served by the wife of an executive of Ralston Purina in 1955. Who was to know that some 50 plus years later it would be a household name. The famous Chex cereal was first manufactured by Ralston Purina in the 1930's and was originally known as Shredded Ralston.

By 1950 the name was changed to Rice Chex and by 1952 the first party mix recipe showed up on the back of a box of cereal. By 1965 the Cereal brand was purchased by General Mills and today the cereal has 6 varieties.

General Mills also produces and sells 15 assorted flavors of Chex Mix. But thanks to BettyCrocker.com we have over 100 recipes on their site alone.The famous holiday snack is widely featured at parties, bagged and distributed to friends and family as treats and loved by one and all!

There are so many recipes and variations of this treat it's difficult to decide which one is my favorite. One thing I do know is that I like mine sweet and filled with candy! The recipe presented here is very quick and easy, with just a few ingredients that you probably already have on hand during this time of year.

My recipes name is a bit of a contradiction as I use Life cereal versus Chex. This was originally a matter of convenience and availability. In search of Cinnamon Chex cereal for my holiday mix I couldn't find any at my local store, so I decided to go with Life's cinnamon cereal instead.I really liked the way my mix turned out as the Life cereal is a bit thinner and crisps up really well in the oven. Since then I've stuck with Life Cereal in my recipe.

The original recipe had pretzels in it but since everyone seemed to sift out all the other ingredients, I eventually just left them out of the recipe. When I make the Chex mix for Christmas it has to have all the best of fall and winter flavors. This means brown sugar, cinnamon, cloves, nutmeg some pecans and of course my mini Christmas colored m&m's.

Since we like things spicy in our house I chose to add a bit of Cayenne. You get just a hint of it at the end and it rounds out the other flavors very well. The house smells amazing as this bakes in the oven and everything feels perfectly Christmassy. Not to toot my own horn but this is really a recipe worth trying! I could barely get it off the baking sheet to get a picture! 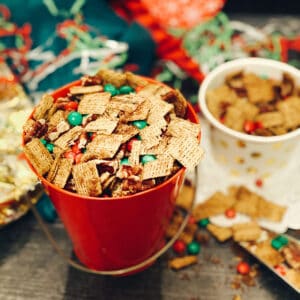