This Best Ever Sweet Potato Casserole is so delicious it's virtually a dessert! It's smooth creamy souffle like base is topped with a crispy pecan topping and baked to perfection. Each bite is full of silky smooth sweet potatoes and a nutty, buttery, crispy topping. This side pairs beautifully with some sliced easy-no-fuss-thanksgiving-turkey, orange-pomegranate-cranberry-sauce, and fresh-quick-green-beans-almondine.

Sweet potato casserole is a staple at Thanksgiving in the Southern United States of America. Originally a tuberous root from modern Peru, it is believed that the sweet potato has been grown in the US since the mid 17th Century. The warm and humid climate of the South makes it the perfect breeding ground for this vegetable.

Similar to Yams, originally the sweet potatoes of Thanksgiving were diced and cooked in a sweet glaze. The concept of the potatoes in a casserole form has actually only been around for about 100 years. Interestingly enough, the first such recipe was developed as part of a sales and marketing strategy by the producer of marshmallows.

The first mass produced marshmallows became available in the early 1900's, produced and sold by "Angelus Marshmallows".  Per smithsonianmag.com the owner of the company got the founder of the then popular "Boston Cooking School Magazine" to develop recipes using marshmallows to help increase sales.

The 1917 Boston Cooking School Cookbook published the first sweet potato casserole recipe with marshmallows and the rest is history.

Here in the South, I've grown to like and love the variation of the casserole with a crunchy streusel topping. Featured as a side dish at two of my favorite restaurants, Ruth's Chris Steakhouse and Half Shell Oyster House, I absolutely had to create my own recipe.

If it wasn't for the calories, I would make it more often. Come Thanksgiving, it's the one side I get most excited about. Luckily, the recipe is very easy to make and can be prepped ahead of time. This makes it a definite Win!

The only downside to this recipe in my eyes is that you'll end up eating too much of it!

As the ingredients below show, this casserole is almost a dessert. The half and half and butter help give the potatoes a silky texture and the eggs help set the mixture and prevent it from being too runny. The brown sugar helps give the casserole a caramel like flavor, while the nutmeg gives it the beautiful fall aroma one associates with thanksgiving.

Peel and dice the potatoes for the most even and quick cooking. It's best not to add too much water as overcooked potatoes can become slimy. Drain any residual water and let the potatoes air dry completely for a few minutes. This yields the best consistency for the casserole.

Add all the ingredients except the eggs while the potatoes are still warm and mash well.

Add the eggs only after the mixture is at room temperature. This is to prevent the eggs from cooking as you mix them in.

Prepare the streusel topping while the oven preheats. For best results I chop the pecans. I feel they mix better and create an even crumble. However, if you prefer bigger pieces feel free to leave the nuts unchopped.

Melt the butter and mix all of the ingredients to create the topping and sprinkle on top of the mashed potatoes. I like a thick layer of the streusel topping on my sweet potatoes, but if you prefer less, feel free to halve the quantity.

Bake in the oven for about 30 minutes so the potatoes set and the topping crisps up and serve!

A quick minute under the broiler or if you have a blow torch, a quick broil at the end works great to brown the top and give that caramelized taste and texture to the casserole.

Some people even like to add the Streusel topping along with some marshmallows at the end. Let your imagination run wild and come up with your own combination! You might just come up with the next Thanksgiving sensation!

Prep Ahead Of Time

The best part about this casserole is that you can prep it ahead of time and bake it on the day of Thanksgiving. Here are two ways to do this:

Make the potato mixture 1-2 days ahead of time and place it in the fridge. Prepare the topping at the same time, but keep it separate until it's time to bake the casserole as per instructions below.

The sweet potato mixture and pecan topping can stay in the freezer for upto 3 months. Make sure to freeze the topping in a separate ziploc bag to prevent it from getting soggy.

The day before you need to bake the casserole, thaw everything in the refrigerator. On the day of baking, place the ingredients on the counter for 30 minutes before putting them in the oven.

Leftover casserole {if you have any} can stay in the fridge for up to 4-5 days. Freezing any leftovers is not recommended as the pecan topping will get soggy. 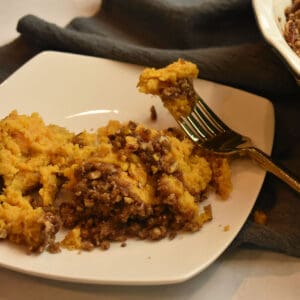 Boiling The Potatoes - Cutting the potatoes helps them cook quicker and more evenly. Make sure the water in the pot fully covers the potatoes to insure optimal cooking. Before The Potatoes Bake - Your mixture will be a little runny prior to baking. Once they cook, the eggs help them set.