This Nihari Recipe {Pakistani Beef Stew} is a delicious dish that hails from the royal kitchens of the Mughals. This is the perfect dish to have at your dinner table on special occasions.

This rich and spicy stew dates back to the late 17th or Early 18th Century. The word Nihari comes from the Arabic word Nihar which means morning. Made with beef shank and cooked for hours, one bite of this delectable stew will have you hooked for life.

Served to the Nawabs of the Mughal Empire at the time of the early morning prayer, it continues to be a popular choice for breakfast and brunch today.

With the passage of time, the nutritional value of the stew led to it being a popular choice with soldiers and laborers. Post the India/Pakistan partition Nihari found its way from the streets of old Delhi to the streets of Karachi.

Today the heavy dish with its spicy gravy is a popular street food. Enjoyed by many for Sunday morning brunch, a Weekend dinner treat or just because they're in the mood for it!

What Really Is Nihari

Growing up in Pakistan, Nihari is a special treat and one that isn’t always cooked at home. Since it's so easily available and affordable, it's one of those things like sooji halwa, aloo masala and chana masala that we usually obtain from street side vendors.

The street version is usually Nalli Nihari, and is made with shank meat and beef bones that contain yellow bone marrow. This marrow gives the meat stew the best flavor. Served with lemon wedges, chopped green chili peppers, slivered ginger, cilantro and some fresh hot naan, it is an unforgettable taste.

Traditional Nihari Recipes are made with beef, but there are versions of the recipe with other meats, such as Chicken Nihari and Mutton Nihari. I personally prefer the original Nihari recipe that is a hearty beef stew made with marrow bones.

While I can’t deny that I’ve used store bought spice blends such as shanfoods.com for my Beef Nihari Recipe, for Great Nihari I recommend that you make your own Spice Blend.

It may seem complicated, but once you have the spices in your pantry it takes 5 minutes to make the mix and it’s so worth it! Your Nihari will have that unique Karachi Street Food Taste and all the spices will be organic and wholesome!

The three main things essential to an amazing pot of Nihari are the meat, the spice blend and the cooking technique! There is honestly nothing complicated about this recipe, it just requires a little time and patience as the meat has to slow cook. I usually just plan to catch up on other household chores while my Nihari cooks!

The preferred cut of meat for this recipe, if going with the beef version, are beef shins otherwise known as boneless beef shank.  Although I would highly recommend adding in the bones as well. If you go to a Halal grocery store that specializes in meat for Pakistani Recipes, simply ask for “Nihari Gosht”.

Shank Meat is tough and sinewy, but when cooked on low heat for an extended period of time it gets tender to the point that it (literally) melts in your mouth

An alternate is big pieces of tender boneless meat such as chuck {front shoulder} or round {rear muscle} but once again, without the bones and marrow, the results won’t be as good.

The slow cooking process along with the bone and marrow adds to the intense flavor of the dish. Although many people use goat meat, chicken or even lamb to cook this dish I would highly recommend finding a good butcher and getting a tender beef shank for your Nihari.

As mentioned earlier, there are many popular pre manufactured spice blends on the market. However, it is a well-known fact that spices retain their natural flavor and aroma much better and longer in their whole state.

Therefore, grinding your own spices in small batches to make your own Homemade Nihari Masala by far leads to a more flavorful dish.

There are also less preservatives and additives in the spice mix this way and as such it's a much healthier option.

The list of spices mentioned in this Nihari Recipe {Pakistani Beef Stew} is indeed very long, but each one is essential to a perfectly balanced blend. Some are pantry staples such as:

that you may already have. Others, such as:

May have to be sourced from your closest Pakistani or Indian Store or Amazon. However, they’re going to come in useful as you explore other recipes on the blog, such as:

that require you to make your own spice blends.

Since you're going to spend a lot of time preparing this dish, I would recommend going the extra mile to get all of them and not take any shortcuts by eliminating them.

The rich nature of this recipe requires the strong spices in the blend in order for the Beef Nihari to have that authentic Old Delhi taste.

Once you have the spices gathered, simply dry roast the whole spices and then grind them using a spice grinder. Mix these with all the powdered spices and your Homemade Nihari Masala is ready in 5-10 minutes!

The actual cooking process for the Nihari Recipe {Pakistani Beef Stew} itself is very easy. In my recipe, I heat the cooking oil at high heat in a large pot and sauté the garlic paste in it for about 30 seconds. Feel free to use a ginger garlic paste if you prefer but since we top the Nihari with ginger later, I just add garlic at this stage.

Similarly, while some people brown onions to a golden brown and use that as the base for their Nihari, I add them later as a “Tarka” or tempering. This gives the Nihari a rich dark color and layer of oil at the top, giving it that professional look.

Once the garlic is sauteed, add in the meat and sauté it till it just changes color and is no longer pink. At this point, add in the spice blend and stir fry for a few minutes to allow the spices to ‘bloom’ or ‘temper’. If you feel like the spices are beginning to burn and are not mixed in properly, you can add a little water to the meat to help everything mix well.

At this point, add in enough water to just cover the meat and bones, cover and bring the mixture to a boil. Then reduce the flame to a low medium heat and cook the Nihari for a long time, around 3-4 hours, till the meat is fork tender.

While the meat is slow cooking at low heat, prepare a flour slurry using Atta, a whole wheat flour made of Durum Wheat. White flour won’t have the same taste so it’s best to use Atta. If you don’t have it on hand, you can use flour but it will alter the taste and texture of the Nihari considerably.

Take a small bowl and make a smooth flour paste using 1 cup of atta and 2 cups of water. Once your meat is cooked through, slowly add this slurry and keep stirring the Nihari to prevent lumps from forming.

To insure there are no mishaps you can make the slurry with hot water. This way there is no rapid change in temperature as you add in the slurry and there is less chance of clumps forming.

Another tip is to keep some boiling water on hand and if the Nihari seems to be getting too thick too fast, add in a cup of water to help thin it out. You can cook the Nihari on low heat with the cover removed to help reduce the liquid afterwards if it seems to be too much.

The last step is what will really perfect your Nihari! Slice a medium onion or two and fry them in some oil and then pour the fried onions along with the oil over your Nihari.

If you really want to add even more flavor, as you’re frying the onions, add just 1 tablespoon of Kashmiri red Chili Powder to the oil at the end. This will add a beautiful red hue to the Stew!

How To Store The Nihari

Nihari is the perfect food to store in the fridge or freezer. It always tastes better when reheated! If you're storing it in the fridge it will stay okay in an airtight container for upto 3-5 days. In the freezer it will last for up to 3 months! I always cook extra and freeze some for when the craving strikes!

DID YOU TRY THE RECIPE?

Please don't forget to leave a rating and comment below! If you take a picture then please tag me on instagram! Thank You! 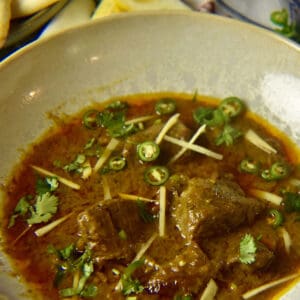