The Beef Pasanday Recipe is little known outside of South Asia but the meaning of its name speaks for itself. The word "Pasand" means favorite and this curry is right up there on the list with the likes of Korma. Similar to the Korma, the emphasis in this recipe is on the more fragrant spices versus those with more heat.

According to seasonedpioneers.com The Pasanda Curry was a favorite of the Mughal Court around the 16th Century. The recipe was a creation of the Kayasths, who were courtiers to the Mughal Kings. Not royalty themselves, they did belong to an upper class privileged community.

The original Kayasths curry consisted of lamb or goat meat. The choicest cut was usually thigh meat, pounded very thin. The meat was then marinated with yogurt and spices, fried and cooked with onions.

Many variations of Pasandas existed, one of the more popular ones being "badaam pasandas" which incorporated the use of almonds in the recipe.

In addition to pounding the meat, the pasanda recipe calls for some form of a tenderizer to be used in the marinade. According to food.ndtv.com the Kayasth favored the use of Kachri powder as a tenderizer. Kachri is a greenish yellow melon that grows in the Rajasthan desert and tastes similar to Amchur powder. On the other hand, the Mughal's used raw papaya as their preferred meat tenderizer.

The recipe may seem complicated at first glance but is fairly easy. Preparing the meat and marinade takes only 30 minutes and the slow cooking process is fairly simple.

Assemble all of your spices for the masala and marinade as below.

Roast and grind the dry spices to make your 'masala'.

Stir the masala and the rest of the ingredients together to make the marinade.

In tying to stay close to the original recipe of the Kayasth I tried to recreate the taste and flavor of Kachri by using vinegar and poppy seeds in my masala and marinade. The vinegar acts as a tenderizer and gives a slightly sour taste similar to that of Kachri or Amchur. The poppy seeds provide the texture and protein that the ground melon would provide.

I know many people who don't like using papaya as a tenderizer so this also provides them with a great option. For those who prefer Papaya I would omit the poppy seeds and vinegar and use 2 tbsp raw papaya in the marinade instead.

After marinating overnight, brown the meat slices by sauteing them in some oil as shown below.

Slow cook the browned meat slices in the prepared onion curry till the meat is tender enough to seperate with a fork. The pasanda curry is on the dry side so once the meat is cooked the water must be evaporated till the gravy just coats the meat.

Since this is a dry curry I like to pair it with raita , kachumber and hyderabadi khatti daal along with hot fresh naan. 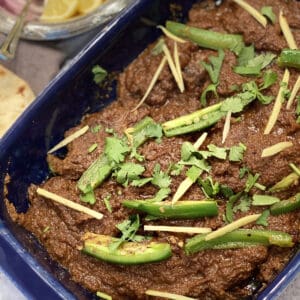