Spelt "Qorma" in Pakistan's native language Urdu and Korma in English, this is one of South Asia's most famed curries. It's history is as rich as it's flavor and pre dates the Mughal era. Different regions across Southeast Asia have slightly varied versions of the recipe and almost all families have their own secret recipe that's been passed down through the generations. Read on to find out more about this ancient recipe!

Korma is a word derived from the Turkish "qavirma" and is defined in thefreedictionary.com as "A dish of South Asian origin in which meat or vegetables are braised or simmered". There have been many variations of the name and the recipe across Central and South Asia throughout history. The one common factor has always been the cooking technique used. the meat is first braised and then slow cooked.

The Indian/Pakistani Korma recipe has its roots in the 16th century Mughal Era. It is believed that that a white korma garnished with 'vark' (a silver or gold edible foil) was served in Shah Jahan's court to all the guests present at the inauguration of the Taj Mahal.

The most widely known and famous Korma is the Awadhi one. While its roots lie in Mughal cuisine, in later years it was adapted and changed by the Nawabs of Lucknow. This is a yogurt and onion based curry with the emphasis being on fragrant spices versus bold ones.

The Shahi Korma is similar but is a richer and creamier version, saved for special occasions. A little bit of heavy cream or at times even condensed milk is added at the end. The South Indian version of Korma often has coconut milk and powdered coconut in the curry as opposed to yogurt or cream.The Kashmiri Korma uses tamarind, fennel seeds, turmeric and dried cockscomb flowers

Korma brings to mind big family dinners, special holiday gatherings, weddings and many special celebrations over the years. The earliest memories I have of eating korma are when my parents hosted dinners for friends. My mother's Korma was and always will be my favorite. The fragrant smell of cardamom, kewra and the other spices tickle the palate before you take that first bite. The soft fluffy naan absorbs the lightly spiced curry and the soft succulent meat falls off the bone. Your stomach fills up before your senses are ready to call it a day!

Then there's the Korma at weddings in Pakistan! I don't know what they put in it but it is divine! When my kids were younger, they loved going to weddings in Pakistan during our visits, just for the Korma! Prying them lose from that Roghni Naan and plate full of Korma was a chore! Countless stories and Definitely some fun Korma memories! To this day eating this curry brings back many nostalgic feelings in me!

The onions are the base of this curry. What quantity to use? How to cut them? How much to brown them? All of this is important to how your Korma turns out. I would say 1 cup of chopped onions per pound of meat is a good rule of thumb. Pictured below are two onions to give you an estimate since onions come in various sizes. The one on the left is quite large so one may be enough. the one on the right is smaller so you may need more that one. That's why a 2 cup measure may be more accurate.

Traditionally, onions for Korma are sliced very thin and in semi circles. But over the years I've learnt that grinding them in my food processor as shown below saves me a lot of time and actually browns the onions more evenly. Hence the recipe title, Easy Chicken Korma!

I gather all my spices, prepare my garlic paste and crush my ginger. I find it's much easier to have everything prepped and ready so it's ready to add in as and when needed. This helps the cooking process go by smoothly and makes sure nothing overcooks.

When dry roasting the whole spices, make sure you preheat the frying pan. Once you add the spices, keep stirring them to get an even roast and don't leave them unattended at all. 30 seconds to 1 minute should be enough. Over roasting the spices will give them a burnt and bitter taste so be very vigilant at this point.

Whisk the yogurt well to make a smooth paste. This gives the curry a smooth consistency.

Add all of the spices to the yogurt. This will help when adding them to the curry. As they are part of a liquid base they are less likely to burn when going into very hot oil.

This is how brown the onions need to be. As you can see they're very evenly browned due to the way they were ground in the food processor. Add the garlic and ginger at this point and roast a little bit.

Add the chicken a few pieces at a time and roast till all of the pieces are opaque as pictured below.

Crush the cardamom before you add it to the Korma as this releases the essential oils and thus the aroma.

Add the Kewra at the end. Do not add too much as this can add bitterness to the taste. Stick strictly to the quantity in the recipe.

Stir and cook till the oil separates. Place in your serving dish and garnish with your alomnds just before serving.

Some people like to eat their Korma with Pulao but I like mine with a hot piece of Naan. For dessert after you eat the Korma try the mango-kulfi recipe from the blog. It will hit the spot and You will love it!

Don't forget to comment below and rate the recipe after you try it out! 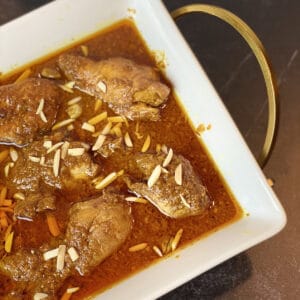 HOW MUCH ONION: The onion I had was very large as they often are at my supermarket so I used 1. If yours are smaller then 2 will be needed. I would say approximately 2 cups (1 cup per pound of meat) is a good rule to apply. GRINDING THE ONIONS: The onions are the mainstay of a good korma. They provide the consistency, flavor and color of the dish. Typically, these are sliced very thin in semi circular slices and sauteed to a nice brown hue. Often strained from the oil, cooled and crushed, they're added back to the curry later. All of this takes quite some time and getting that even brown color can be tricky since it's dependent on a lot of external factors; the stove, the cooking utensils etc. I found a while ago that grinding them in the food processor helps them cook more quickly and evenly and eliminates the need to cool and then crush. Since then I've always done it this way. BRAISING THE CHICKEN: Adding all the chicken at the same time brings the temperature of the oil down drastically and affects the cooking process. Korma is based on the "braised" cooking technique which means the meat must first be fried on high heat and then cooked on slow heat. For this reason we add the chicken a little at a time, fry it till it starts sizzling which indicates the oil has once again increased in temperature and then add some more.  MIXING THE YOGURT & MASALA: I always like to mix my dry spices in the yogurt before I start adding them to my curry. Adding them in mixed with a wet base prevents them from getting a burnt taste, especially as they've already been roasted. ADDING THE GARNISHES: Adding the 6 pods of cardamom and the kewra at this stage is what gives korma it's famous aroma. The entire cardamom is added, but it's crushed lightly to release the essential oils before doing so. Too much of the Kewra can cause the Korma to taste a little bitter so stick strictly to the measurements. The almonds are added right at the end to prevent them from getting soggy.