Burmese Khow Suey {Curried Noodles} is a delectable coconut noodle soup. Originally a Burmese dish, it has a permanent and historic place in Pakistani and Indian cuisine. A favorite ,especially with the Memon, Gujrati community, today you can often find a bowl of Khow Suey at many a table in South Asia.

Known as Khow Suey, Khao Suey, Khao Soi or Khausa, this is a recipe that has as many adaptations as names. Whichever version of it you eat, every bite of this coconut milk curry inspired by Burmese Cuisine is pure heaven.

Per youlinmagazine.com Burma, or as we know it today, Myanmar, had a huge Indian and Muslim presence in the past, one of the largest groups settled there being the Memons, who were business owners from Gujrat, India. It is believed that they were originally deployed to Burma during World War II, many choosing to make it their permanent home after the War.

Primarily businessmen and traders, they continued to do business with their family and acquaintances in India, the coconut soup thus traveling with them and finding a second home in India.

After the partition of Pakistan and India in 1947, the noodle dish travelled from the Indian Subcontinent to Karachi, Pakistan along with the migration of the Memons and it is believed that "Khausa" as they call it is such an integral part of their cuisine, many don't even realize that it is of Burmese origin.

Today both Pakistanis and Indians enjoy the one dish meal made with a coconut milk broth. Once you try a bite, you’ll be as smitten with this chicken curry as South Asians are!

The recipe that I am sharing with you today was handed down to me by a dear cousin and is a little different from the traditional Memon version. I have yet to try a Khow Suey recipe I don’t like but have stuck to this one for years as it makes a flavorsome soup and is very easy to prepare.

Many recipes call for multiple steps and require multiple cooking utensils but this is a One Pot recipe, making prep and clean up very easy and straightforward.

As mentioned before, my recipe is very simple, as you can see by the size of my ingredient list below. I use a simple three spice blend comprising of salt, turmeric powder and red chilies.

Many people use a broader assortment of curry spices or add a curry paste to their Khow Suey. Cumin seeds, coriander powder and lemon grass are some favorite additions.

However, I refrain from adding too many and instead, let the elaborate garnishes at the end add a lot of the extra flavor.

The Base of The Curry

The base, like that of any curry is made up of onions, garlic and tomatoes. Chicken breasts are cubed and stir fried with all of these ingredients and simmered to create a juicy stock which is thickened by gram flour and flavored with coconut milk.

Be sure to use gram flour and not chickpea flour as the two are different. Gram flour is derived from yellow gram lentils and Chickpea Flour is a derivative of garbanzo beans.

Although I highly recommend making the curry with chicken, if you’re a vegetarian you can still enjoy it!

In this case, I would brown the onions, sauté the garlic and add some vegetable stock along with the tomatoes, spices and gram flour to make the curry.

If necessary, you can use an immersion or upright blender to help create a smoother curry. Add in the vegetables such as baby corn, green beans, bell peppers and any other favorites along with the coconut milk.

Simmer the curry for no longer than 15 minutes and then serve with the noodles and garnishes while hot.

For the boiled noodles, I like to use wide egg noodles. This original Burmese Khow Suey recipe was made with Spaghetti but after trying a version with egg noodles we switched over!

My kids like the taste better and it’s much easier to eat the curry with the smaller noodles!

For a Gluten Free version, try the Khao Suey Recipe with Rice Noodles! It will still taste amazing!

If you ask me, this is perhaps the best part of khow suey! There’s a lot of room for creativity when it comes to deciding on the delicious toppings you’ll pair with your recipe. In my family we’re creatures of habit and stick to the same basic lineup every time:

Some additional topping ideas and variations you can try are:

Like I said! The toppings are the best part as they allow you to adapt the recipe to your taste buds.

How To Serve The Khow Suey

Burmese Khow Suey is perfect for when you're entertaining a small group of people. The assortment of toppings makes for a beautiful presentation. Plus, the variety of condiments enable the guests to customize their bowls based on their personal preferences.

I usually serve mine family style; with the noodles and curry in large bowls and the toppings in smaller individual bowls. This way, every one can ladle exactly the quantity they want into their soup plates {My preferred dinnerware for this curry}.

When eating Khow Suey, first ladle the egg noodles into your plate and then pour the rich broth you’ve prepared over the noodles. Add the desired toppings, especially your choice of citrus, as the tanginess of lime juice really gives the curry a nice finishing touch.

Once you're done eating don't forget to rate and review the recipe and if you have time to take a quick picture BEFORE you start eating please share it on social media and tag this page! 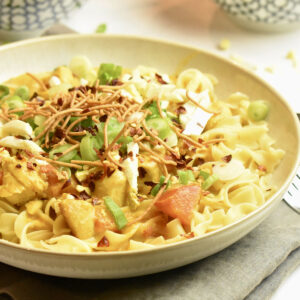 Gram Flour - Gram Flour, also known as Besan by Pakistanis and Indians is similar to Chickpea Flour. However, gram flour is made from split chickpeas known as yellow gram lentils vs the garbanzo bean variety of chickpeas. As such it's better to try and use authentic gram flour which can be sourced through South Asian Super Markets or purchased on Amazon. Tomatoes - I use Roma tomatoes for this curry. If you don't have fresh tomatoes on hand, or want added convenience, you can add a ⅓ cup of crushed canned tomatoes instead. The canned tomatoes also give the curry a smoother consistency which you may prefer. Egg Noodles - I use wide egg noodles that come in a 1 lb bag. Depending on the noodles to curry ratio you like and how many people you're feeding, you may want to make more than 1 packet. Crispy Noodles - Traditionally, noodles were fried till crispy and then used as a topping, but fortunately, there are easy alternatives. I use store bought La Choy crunchy noodles, which are easily available at all supermarkets in the Asian or International foods aisle. Roasting The Gram Flour - This part is essential as you want the gram flour to taste nutty. Without roasting it, besan can have a raw taste. However, you will notice that since the flour absorbs all the oil and liquid, it will start sticking to the bottom of the pan. I usually keep a cup of water on hand and splash a little bit as necessary to prevent the flour from burning. This part is very tricky, because you don't want to add too much water so you want to get a roast, but you don't want the flour to have a burnt taste either. Water - At this point the mixture will look sludgy and almost like a butter chicken. After it simmers for a while and once you add the coconut milk the consistency will be perfect and as seen in the picture. Once again, if you feel you need to add more water feel free to do so but not too much, only enough to prevent the mixture from sticking to the bottom of your pan. Adding too much water will result in a very thin curry.