This Easy Balochi Sajji Chicken is a quick and simple make at home version of the traditional Pakistani Rotisserie Style chicken. Prepared stovetop as a slow cooked roast rather than skewered and roasted over an open fire, it is just as delicious, with a lot less effort.

Sajji is a style of cooking that is popular in the province of Balochistan, hence the name Balochi Sajji. Traditionally this recipe is made with goat or lamb, but in modern times chicken sajji has become popular as well.

In this traditional version, the meat is simply rubbed with salt, skewered and cooked over an open fire all night long. The final result is meat that is crispy on the outside and soft and juicy inside. Served with some fresh squeezed lemon and a special flat bread called "Kaak", nothing else is needed to complete the meal.

Due to it's long cooking time, Sajji is something usually cooked at special occasions such as weddings or Eid.

Modern day Sajji is far removed from this traditional version. Now available all over Pakistan as Street Food, it is most often cooked using Chicken. Still skewered and roasted like the traditional sajji, this one sometimes uses a more complex spice blend .

Brining the chicken makes it much juicier and tender and I would highly recommend it for all of your roasts. I do it with my homemade-deli-roast-beef as well if you've tried that recipe.

Wash your chicken and pat it dry. Make a solution of water, salt and white distilled vinegar and fully immerse the chicken in it. Place the soaking chicken in the fridge to brine.

How Long To Brine

The required time to brine chicken is 1 hour per pound of meat. Any longer and the meat can actually get a bit mushy.

How Does Brining Help?

After the 2 hours are over, I remove the chicken and pat it dry. Next I mix and generously spread the marinade all over it. The chicken then goes back in the fridge for an hour to absorb all of the flavors.

After an hour, take the chicken out of the fridge, heat some cooking oil in a wide pot and saute the chickens, one at a time. This helps seal in the juices so the chicken tastes better.

It's best to saute the chickens one at a time as adding them both together causes the temperature of the oil to drop too much. This prevents a nice even roast on the outside.

After the Saute is complete, Add both the chickens to the pot along with 4 cups of water. Cover and bring the liquid to a boil, then reduce the heat to medium low. Let the steam that has been created cook the chicken through.

After about 20 minutes I use my thermapen-one meat thermometer to check if the chicken is done. The thermometer should read 165 degrees F to 170 degrees F. At this point, dry the liquid and repeat the saute to give the chicken a nice caramelized color.

NOTE: If the chicken seems done, remove it from the pot, dry the liquid and then return it to the pot to saute. This will prevent the chicken from breaking apart.

For the last step, prepare the Balochi masala,by mixing all of the ingredients. Dry roast the coriander seeds and cumin seeds and then grind them to a powder. This ground mixture is then added to the rest of the spices to make a delicious and fragrant spice mix.

After the second Saute, the residual oil and marinade coats the chicken nicely. At this point, drizzle some lemon juice on the meat. This along with the marinade will help the spices stick on the chicken as you generously sprinkle them on.

What To Eat The Sajji With

I hope you enjoy it! Please share your ratings and comments below! 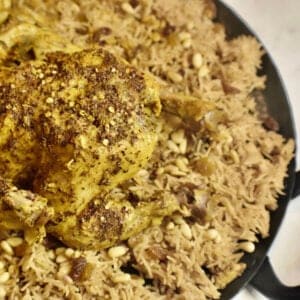 Chicken - I use skinless cornish hens for my Sajji. These are usually about 1 lb each and 1 feeds 2 people. I don't recommend anything bigger than a 2 lb chicken as the smaller chickens are juicier and more succulent. They are also quicker and easier to cook. I prefer the chicken skinless for this steamed version of the Sajji as the skin only tastes good if it's crispy. Going skinless also helps reduce the fat content and calories of the meal , which for me is a plus factor.  Cooking Oil - I used Canola oil in this recipe, but avocado oil, sunflower oil, vegetable oil or peanut oil would also work well.  Brining The Chicken - Brining, or soaking the chicken in salt and vinegar water makes the chicken juicier and more flavorful. An hour per lb of chicken is enough as too long in a brining solution can actually make the chicken mushy.  Sauteing The Chicken - This step is essential as it helps seal in the chicken's juices and also gives the roast a nice caramelized color. Finishing The Chicken - I usually like to finish the chicken with a second saute or sear at the end. If the chicken seems cooked I remove it from the water and dry the liquid separately. This prevents the meat from overcooking and drying out. As the liquid evaporates and all I can see is the residual oil and fat, I add the meat back to the pot and brown a bit more on all sides.