Roast goat leg or "Sikandari Raan", named after Alexander the Great is a popular dish for celebrations in Southeast Asia. With Christmas coming up I thought I'd present you with my family recipe. Apart from being delicious, it makes a beautiful centerpiece at the table and is a nice change from the more traditional meats usually served.

Originally cooked at the great conquerors wedding feast as per this article in financialexpress this dish has become symbolic of family and fellowship. Early recipes were simple, with a marinade that incorporated  some form of citrus juice, salt and pepper. This was followed by a few hours of spit roasting the meat over an open fire.

Modern recipes are a bit more elaborate, requiring at least 12 hours of marination and 4-6 hours of slow cooking. The essence of a good goat leg roast is that the meat should be tender enough to fall off the bone.

Vinegar, papaya and yogurt are amongst the most popular tenderizers used towards this purpose. A centuries old cooking method called Dumpukht is the traditional way of cooking the goat meat. "Dum" means slow cooking and "Pukht" meaning cooking process.

In the past, this was achieved by cooking in a huge pot on a wood fired stove. Although the Raan is predominantly cooked in an oven today I still choose to cook mine the traditional way, on a stove. Both methods are detailed below, so you can choose whichever one appeals to you.

Whichever method you opt for, the essential technique that must be adhered to is the same. The goat meat is first seared to seal in all the juices and then the cooking utensil is sealed with foil to create the steam needed for the slow cooking .

Growing up, a roasted leg of goat meant there was some type of celebration going on. Either it was Eid, our semi annual muslim celebration, a special family celebration, or company was coming. No matter what the purpose, I knew there was a treat to look forward to later that day.

The excitement starts when the meat is first marinated with a blend of aromatic spices. As the slow cooking starts the mouth watering smell permeates the entire house. The anticipation builds up throughout the day and dinner time is eagerly awaited.

If you've never eaten goat meat, you need to give it a try! However, If you feel squeamish about it, as I know some people do, then follow this recipe using a nice whole leg of lamb.

One of the Key steps to a good goat leg roast is your choice of cut. As I've mentioned in a few other recipes on my blog, for example my Nihari recipe, buying the right meat is the key element in a slow cooked recipe.

Of course the better the cut of meat , the more expensive it is. However, since you're likely making this on a special occasion and spending a minimum of 18 hours on prepping it I would suggest going for the best.

The younger and smaller in weight the animal, the more tender the meat.So when I'm at the butchers I try and aim for a whole leg of goat that is no more than 2-2.5 pounds.

Marinating the meat properly to insure that it is adequately seasoned and tenderized is a vital part of cooking this recipe. You can see in the picture below that I've made a few slanted cuts in the leg. This allows the marinade to really penetrate and flavor the meat.

When you apply the marinade, you must rub it well into these cuts. As mentioned above, assorted tenderizers can be used in the marinade. For my recipe I chose to stick with a yogurt based tandoori masala blend I prepared. This blend is a little different from the one that I use on my Tandoori Chicken, as goat meat is richer in taste and tougher in texture, thus requiring deeper flavors.

The first step is to fry the onions to a dark brown. These will then be cooled and added to the marinade.

All of the ingredients are then put through a food processor to prepare the marinade.

Next, the meat is marinated and placed in the fridge overnight.

Now that the meat is well marinated, sear it in very hot oil to seal in the juices. You need a good bit of oil for this to be done properly but can discard the excess amount later. I use about 1 cup of oil in order to have a thin layer on the entire bottom of my pot.

Once the oil is well heated remove the Raan and let it sizzle for a good 5-10 minutes before flipping it carefully. If you're cooking 2 goat legs then sear each one separately to help maintain the oil temperature and get an even brown. The pictures below illustrate what the meat should look like once seared.

There are two ways to cook the meat. The traditional, stove top or "dum pukht" technique or the newer oven method that many people prefer.

Once the meat is seared you can remove the excess oil and add the goat back to the pot. Fill the pot with the remaining marinade and water till halfway full. Seal tightly with foil and cover with a lid, cooking on high for about 10 minutes. At this point, reduce the heat to medium and cook for 3 hours before checking on the meat.

After the 3 hour mark insert a knife in the meat to gauge how well cooked it is. I usually need to cook mine for another hour at least but do so uncovered so as to dry some of the excess liquid. If you still have too much liquid and your meat is done, then remove the meat. You want it to fall off the bone but not become mushy and this allows you to thicken the gravy without that happening.

Although I personally prefer the traditional "dumpukht" stovetop method, the oven method is always an option. First sear the meat on the stove and then follow the directions as detailed in the recipe card below.

At this point I peel and cut some potatoes into quarters and cook them in this marinade. This gives them all that flavor from the yogurt and spices, making for a very flavorful side.

Once the potatoes are done, I remove them from the pot and continue to thicken the liquid. I use the thick gravy as a drizzle on my meat and potatoes once I plate them to prevent the roast from getting dry.

In the event that there are leftovers, I remove the meat off the bones and store it in an airtight container. In the fridge the meat can be kept for upto 2 days and in the freezer for upto 1 month. If freezing the meat, the potatoes cannot be frozen as they become crumbly and loose their texture. It's best to make fresh potatoes to go along with the leftovers.

I usually drizzle the gravy on top when storing so that when I reheat the meat there's moisture and the meat doesn't dry out. Both the microwave or the oven can be used to reheat leftovers. If using an oven, preheat it to 350 degrees and place the meat and gravy in an ovenproof dish covered with foil. Heat for 30 minutes and serve.

I hope you decide to try this recipe this holiday season or for your next big celebration. Please don't forget to rate the recipe and comment below to let me know how it went! 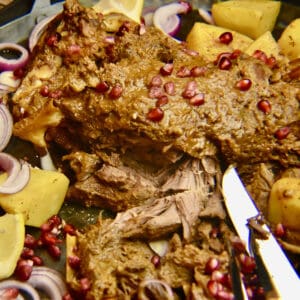 Salt -  As precise as I try to be in my recipes, this is the one area I often get comments on in my recipes. I tend to go light on salt in general and always feel it's best to err on the cautious side as you can always add more later, but if something is too salty it can completely ruin the taste of the dish. In this recipe however, I will note that since the salt is going into the marinade, at times the meat itself can taste a bit bland. To counter this, I suggest rubbing ½ a teaspoon of salt directly into the meat itself before adding the marinade. If you're in the less salt camp, adjust the quantity in the marinade accordingly. If you like things on the saltier side, then the ½ teaspoon can be your additional salt. Yogurt - Plain Full fat yogurt is always my recommendation when it comes to cooking. It helps make the gravy/masala thick and creamy, as you want it to be. Goat Leg Size - 2 - 2.5 pounds is my recommendation as far as the size of your leg is concerned. You always want to source the meat from a smaller animal as the meat will be more tender. Dry Roasting The Spices - The purpose of roasting the spices is to release the essential oils and hence the flavor. Over cooking can lead to a burnt and bitter taste so being vigilant during this step is very important. Storing The Spice Mix - While whole spices can be stored in a cool dry place for a while, it's best to roast and grind them just before using them in your recipe. The whole purpose of this is to release that fragrance and once you store the ground spices they lose that aroma fairly quickly. This step doesn't take long at all and I wouldn't compromise on it. Cutting Slits In The Leg - Since we're dealing with such a large piece of meat, getting that marinade to really do it's work is a bit tricky. The diagonal slits help the spices get to the middle of the meat more easily rather than just flavoring the top layer. However, be careful not to cut too deep as this will ruin the presentation of your finished product. Steam Method Of Cooking -  Slow cooking by using steam in a tightly sealed container is an ancient method called "Dum Pukht" . In ancient times, the cooking utensils were sealed with a strip of kneaded dough, but today, foil does the work just as well as long as it's tightly wrapped. This seals in all the meats juices and leads to very tender and flavorful meat. Cooking The Raan Uncovered - Once the steam has done it's work, it's time to dry the excess liquid and get a nice roast on the outside of the goat leg. This stage does just that. It also helps thicken the liquid the meat has been cooking in and turns it into a delicious gravy for the meat and potatoes. Cooking The Potatoes - Quartered potatoes are cooked in the remaining gravy at the end. Since potatoes need very little time co cook and we want the quarters to retain their shape, we add them in the last 30 minutes of cooking. If they're done after 15/20 minutes, I usually fish them out and set them aside till the meat and gravy afre ready.