If you’re looking for an easy fall dessert then this Pear Cranberry Gingersnap Crisp is it! Sweet Bartlett pears are combined with tart Cranberries and seasoned with some fresh grated ginger and fall spices for the filling. The notes of ginger are continued in the crunchy topping through the addition of crushed gingersnaps. Finally, sweet, nutty and buttery pecans add the necessary mellow touch to balance the spicy notes and bring the dessert to a delicious finish!

Is It a Crumble Or Is It a Crisp ?

You've probably heard the terms Cobbler, Crumble and Crisp thrown around but what exactly is the difference between the three?

All three are fruit based desserts with a flour or crumb based topping on top. Per the thekitchn.com the difference lies in the type of topping.

A cobbler has a biscuit or cake style topping that's placed on top of the fruit in big dollops.

The crumble has a streusel like topping but without the use of oats. The result is a slightly sandier texture than that of its counterpart.

The crisp has a topping that contains oats and at times nuts. This makes it crispy, hence its name.

The History Of The Crisp

The records of the first ever Apple Crisp seem to date it to around 1924, both in Britain and in the United States. A recipe for the dessert appears in "Everybody's cookbook: A comprehensive manual of home cookery" and once again in an article in the Appleton Post Crescent in 12/9/24.

Based on popular opinion, World War II further led to the popularity of this dessert. SInce ingredients for pies were hard to source, crumbles and crisps became the prefered dessert.

From there on the dessert has evolved and become increasingly popular. It's a perfect way to showcase seasonal fruit and very easy to make, making it a popular choice both summer and winter!

I've always loved cranberries! So much so that I make a huge batch of my orange-pomegranate-cranberry-sauce every year and literally eat it with everything! This year I'm taking that love a little further and experimenting with a few other recipes!

Cranberries have so many health benefits and are so low in calories, that even with sugar added, they're a great addition to desserts. The only negative to this delicious berry is that the season is very short lived!

Well, I recently found out how to freeze fresh cranberries and plan on freezing a batch so I can bake away throughout the year!

I am a big fan of fruit crisps! Lighter than a pie, and much easier to make, they are a perfect way to showcase seasonal fruit! Perfect for a large crowd, did you know that you can make the crisp topping a few weeks ahead of time and freeze it?

This Pear Cranberry Gingerbread Crisp has all the feels of a Christmas Dessert! The red color, spicy smell, gingersnap cookies and pecans all work together to create the perfect taste. Take this to your next potluck and wow your guests!

In a crisp the fruit is usually the star of the show. But for me I love my topping! I personally add a thick layer and this recipe is based on that ratio. If you prefer less, then make less or better still just freeze the extra to use later!

The fruit is marinated in sugar, lime juice and orange juice. Whereas this adds to the flavor and prevents the fruit from browning, it's important not to have too much liquid. To prevent the crispy topping from becoming soggy I add some flour to my fruit mixture.

This thickens the juices and creates a rich and bubbly sauce. An alternate option is cornflour, in fact some people prefer corn flour as it creates a more clear and glossy sauce.

is the correct measure to thicken a recipe.

However, this also depends on the type of fruit being used. For example, cranberries contain a fair amount of pectin and the liquid thickens quite well.

On the other hand, if you were to work with a fruit like strawberries, you may need to adjust your ratios.

Unlike in a pie, in a crisp it's better to melt the butter and add it to the flour. This hydrates the flour and as a result it gets crisper.

Not only does the lemon prevent the fruit from browning, it also helps to balance the sugar in the dessert.

For a Crisp it's best to cook at a slightly lower temperature, 350 degrees, for a longer time. This allows the fruit to cook properly and the topping to crisp up evenly and not burn.

Before I {finally} get to the recipe let me suggest the best way to store and reheat your crisp if you have any leftovers!

There you have it! All the instructions to make the best ever crisp! Don't forget to tag, rate and comment! 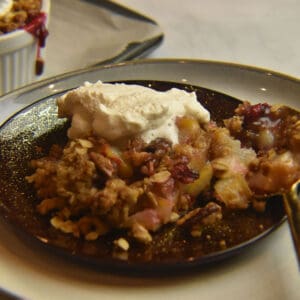 Flour - If you'd like to substitute cornstarch instead of flour, for this quantity of fruit, use ½ tablespoon. Calories - If you'd like to reduce the calories, halve the crisp topping and omit the whipped topping. Whipped Topping - A great substitute for the whipped topping is a plain old scoop of vanilla ice cream! If you're pushed for time just omit this part of the recipe!