Where Did this Recipe Originate?

A Pulao or Pilaf is rice cooked in an aromatic chicken stock or vegetarian stock using the absorption method. The Rice Pilaf recipe originated in Persia and from there travelled through areas of the Middle East, Asia and Europe.

The book An Edible Mosaic: Middle Eastern Fare with Extraordinary Flair by Faith Gorsky of the blog anediblemosaic details the original rice dish in great detail and depth.

Each Region has adapted the rice recipe to suit its own palate and cuisine. The name has variations as well; called Plov in Middle Eastern Culture, Pilav in Turkish and Polo in Iranian, we can see the similarity clearly.

What Rice Should I Use?

Since this is a rice dish, the main question is which type of rice to use? There are so many varieties out there; white rice, medium grain rice, parboiled rice and so many more that using the right one for a particular recipe is key. Both the Middle Eastern Recipes and traditional Pakistani Pulao recipes favor the use of Basmati Rice.

This is a long grain rice, with a delicious nutty taste and aroma that cooks beautifully and tastes delicious in this recipe! Jasmine rice and Sushi rice would be too starchy and sticky for a good Pulao. Brown rice has a texture that is too firm and chewy. A good Pulao requires a long grain rice where each grain of rice stays separate after being cooked.

A straightforward and easy recipe to make to begin with, the Instant Pot makes it even easier by reducing the preparation time by half! Prepare your main dish on the stove and the rice, your side dish, can be cooked simultaneously in the Instant Pot. Of course, the Pulao can also be eaten as a vegetarian meal all on its own, should you so desire!

The first step is creating the aromatic broth the rice will cook in. Since this is a vegetarian rice, this is not very complicated.

Start by taking some olive oil and sauteing the chopped onions in it. Once these are nicely caramelized, add some minced garlic cloves, a teaspoon salt (or more according to taste) and a little ground coriander.

This is the base that will give the Raisin & Pine Nut Pulao {Instant Pot} all it’s delicious flavor. The next step details what spices are used to give the Pulao it’s amazing fragrance.

Adding In the Spices

At this stage, you can add some water to make a stock with the cooked onions and garlic. For added flavor, use vegetable broth or chicken broth instead of water.

The Middle Eastern Version uses some additional spices, such as bay leaves, curry powder, saffron liquid and cardamom pods. But I decided to stick to the traditional spices used in a Pakistani Pulao.

Finally, add in some soaked, rinsed basmati rice along with some regular raisins. I use golden raisins as opposed to Sultanas, keeping in line with a more Pakistani version of the rice, but feel free to swap them out if you prefer. Place the tight fitting lid on your Instant Pot, set your timer to cook and get your serving dish ready!

Once you open the lid to your Instant Pot, you’ll see your Pulao has a beautiful golden hue and the raisins are nice and plump! Unlike the yellow rice favored in Middle Eastern Cuisine, this one is more of a golden brown. But it’s just as beautiful when presented at your table garnished with the golden raisins and pine nuts. Next just fluff the rice with a fork, dish it out in a serving dish and sprinkle the pine nuts on top.

The rice can be stored in the fridge for 2-3 days (if it lasts that long). For reheating, the microwave is best as the moist heat freshens up the rice!

I don’t personally recommend freezing rice as it loses its shape and texture. With this Instant Pot recipe, it's so simple to cook a fresh batch whenever you want it, that it’s better to make a small quantity at a time and eat it fresh.

What To Serve the Pulao With

In Traditional Middle Eastern Cuisine, the Pilaf is enjoyed with Chicken Shawarma, or some Kebab. Since this is a Pakistani Pulao, some food pairing suggestions are: 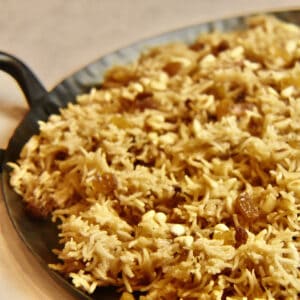 The Whole Spices - You can add the whole spices as is or make a small pouch by tying them in a small piece of cheese cloth and dropping them in the water. They will still release the aroma and you won't have to pick them out later. The Pine Nuts - You can add the pine nuts as is or dry roast them slightly in a non stick frying pan to bring out the flavor. The Onions - Caramelizing the onions well is essential to the color AND flavor of the pulao. Most Instant Pots have a timer for the saute function and usually this step takes about 15 minutes or so. My Instant Pot Saute timer is set to 15 minutes, but for some recipes this is not sufficient. Once the timer shuts off I just restart the timer again. If I'm done before the 15 minutes, I just press cancel!