My first recipe of 2022, these Vegetarian Stuffed Poblano Peppers evolved as a result of an accidental grocery delivery! The perfect delicious and healthy recipe to kickstart the New Year with, you won't want to give this one a miss!

What Are Poblano Peppers?

According to www.thespruceeats.com poblano peppers are named after the town Puebla, Mexico. The mild pepper is a popular part of Mexican and Southwestern cuisine. Eaten roasted and skinned as well as stuffed, they taste similar to bell peppers.

With almost 0 % fat and only 13 calories per pepper, this beautiful green fruit is very diet friendly. Add to that the high protein, iron, fibre and vitamin A, along with the low carbs and you have a nutritionally dense ingredient for a meal.

How To Cook Poblano Peppers

The poblano has a very thick skin. Due to this, the most common method of cooking the pepper is to roast it and remove the charred skin. The roasting also helps to bring out the sweet taste of the pepper, enhancing it's flavor. The roasting can be done in the oven, on a stove top, or on a grill.

However, in many cultures, stuffed peppers are also very popular. In this case, the skin is not necessarily removed. The traditional Mexican or Southwestern style stuffed Poblanos contain assorted fillings topped with some form of cheese.

Stuffed Peppers Around The World

Stuffed Peppers seem to be a popular recipe around the world. Spain, India, and the Eastern Mediterranean, to name a few countries, eat a variety of peppers with assorted stuffings. The peppers used range anywhere from the milder bell pepper to spicier chilies. The fillings can be meat based or vegetarian and are coupled with spices and sauces based on the particular regions cuisine.

This recipe is based on a Pakistani version of potato stuffed bell peppers, with a few variations. Since poblanos are similar in taste to bell peppers I thought I'd experiment and was pleasantly surprised with the results.

Below are the ingredients for the Poblano stuffing. I like to make the potatoes a little spicy to balance out the sweetness of the peppers.

TIP: I usually like to gather all my ingredients and have them measured and ready. This makes for a seamless cooking process and less problems are likely to occur along the way.

Next are the ingredients for the tangy tomato gravy. The purpose of the gravy is to add a little depth of flavor and moisture to the peppers. The sweet, spicy and tangy flavors fuse well together to create a unique recipe that will pair well with just about anything!

Since stuffed peppers are usually not roasted and peeled, they have to be cooked for a prolonged period. This makes the skin softer and more edible. I like to split my cooking into 3 stages. The first stage, as illustrated below and in this I steam the peppers to make them slightly tender.

I add about ¼ cup water in a saucepan along with the poblanos, cover and bring to a boil. I then turn the flame to low and steam for 15 minutes. After 15 minutes, I remove the peppers and set them aside to cool.

The poblanos are steamed and the gravy prepared as the potatoes are boiling for the filling. Simply saute the onion to a medium brown, add the garlic paste and mustard seeds and saute for a little bit longer. Next, add the tomatoes, all the spices and a little water to help make the gravy. Once ready, set it aside for later.

Dry roast the chickpea flour to give it a slightly nutty taste when it's mixed with the potatoes. The flour helps bind the potatoes so the filling doesn't fall out and also helps add much needed texture and flavor.

Stuff the steamed Poblanos and tie a thread around them to bind the opening and keep the filling inside.

Fry the peppers, this is the second stage of cooking the skin to soften it.

Once fried, place them in the pan with the tomato gravy, add ¼ cup water, cover and cook in the liquid on low heat for about 20 minutes. This is the third stage of cooking to soften the skin. Once done, plate as shown below, garnish with cilantro and enjoy! 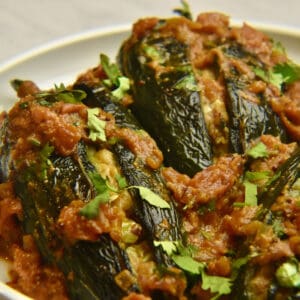