Korean food is another one of my favorites, especially Bulgogi or "fire meat" as it would be called if literally translated. One of the most popular Korean dishes both in its country of origin and here in the USA, Â Bulgogi Â is a dish that dates back to the Goguryeo Era, which lasted from 37 B.C. to 668 A.D.. Of course the recipe has changed and evolved considerably over the centuries and as is typical of most cuisines brought to the United States of America by immigrants, the bulgogi we eat and are familiar with is a far cry from the authentic version that is eaten by Koreans.

Traditionally, a Korean meal comprises of Rice, Vegetables and some form of meat as well as sides, the most famous and well known of which is Kimchi.Â Originally cooked with a rare beef from Cattle called Hanwoo, here in the US Tenderloin, Sirloin or Ribeye are the meats of choice when cooking the dish. The marinade that is generally used is a combination of Soy sauce, Sesame Oil, Garlic, Sugar, Scallions and Pepper and follows the general principles of Korean cooking by using a combination of fermented and non fermented ingredients.

Of course you can experiment and try and make it as authentic as possible by using Fermented Bean Paste (doenjang) and Fermented Red Chili Paste (gochujang) in addition to the traditional Korean Soy Sauce (Ganjang) which you can probably find in specialty stores or on Amazon, but in my recipe I've used grocery store and pantry staples that most of us are likely to have on hand. This makes it easier for me to cook it more often and trust me once you try this recipe you will definitely want to add it to your weekly repertoire.

While the recipe for the meat is the same every time I cook, I often vary the vegetables and sides to shake things up and make it less boring. Some of these ideas are shared after the recipe below so read on and comment to let me know how you ate yours!

DIRECTIONS:
1. Combine and heat the 2 oils. Sesame seed oil gives a nice nutty taste and essence to the dish but too much can be overpowering so I chose to combine the two as you need the amount of oil I've suggested to fry the meat properly.
2. SautÃ© the crushed ginger and garlic for about 1 minute and then add the ground beef, frying till it is no longer pink. 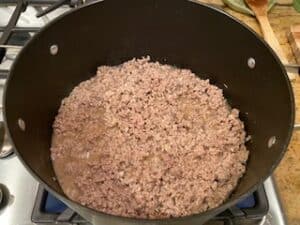 3. Prepare the marinade while the meat is browning. 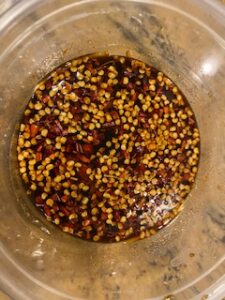 4. Add the marinade to the browned beef and simmer on low heat for 15-20 minutes. 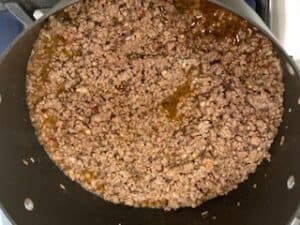 5. Uncover and cook on high till all the liquid evaporates, frying for a few minutes at the end till the meat is a medium to dark brown. 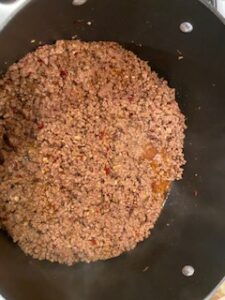 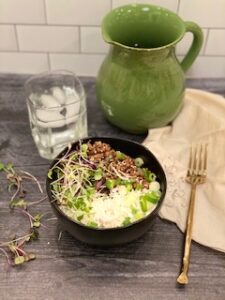 NOTES:
Some different vegetable and rice combos to eat the beef with:

Like I said, use whatever you have on hand at home to layer and build up your bowl and feel free to use the marinade in the recipe above and use it with other meats; ground chicken, turkey or even thinly sliced meats work very well.

Trying to stay on the healthy side? Eliminate the Starch completely and serve the beef with only vegetables. Swap the brown sugar in the marinade for honey, Swerve brown sugar or any alternate sweetener of your choice. Trying to cut back on salt? Use low sodium Soy Sauce instead of the regular variety.

Have some leftover chicken breast? Leftover steak? Chop it up or shred it and mix it with the marinade. Let it sit for about 30 minutes and then sautÃ© it for a few minutes to cook and dry the liquids a bit. Serve it with your preferred carb base and veggies and your family probably won't even guess you're serving them leftovers!

If you have any leftover meat after dinner is over (you probably won't) use it to make bulgogi spring rolls, bulgogi tacos (yes that's a thing), bulgogi pizza or just fill it in lettuce and make yourself a healthy wrap for lunch the next day.