Homemade Chicken broth is as old as recorded history and can be traced back to many ancient cultures. The blog barebonesbroth.com covers some of the rich ancient history of this delectable soup. The irony is that we don't even treat this as a soup any longer but a base ingredient for assorted recipes. As per the blog at a point in time it was served as refreshment to weary travelers at Inns.

Used through the centuries for medicinal purposes, modern medicine also touts its immunity boosting properties. The ancient Chinese believed it aided digestive health and the kidneys and the ancient Egyptian physicians prescribed it for colds and asthma.

Known by many names, stock, broth or 'yakhni' in my native Pakistan, there are probably thousands of recipes for homemade chicken broth in existence. Master chefs have secret recipes that they use to create delectable gravies and soups in their kitchens. Grocery stores sell tins and cartons of assorted varieties under many different brand names. It can at times be confusing to decide which one to buy or what a recipe actually calls for!

I don't know about you but even though I cook a lot it was only recently that I found out the difference between stock and broth. As per foodnetwork.com stock is made from bones and broth is made from actual meat. Stock usually cooks for a much longer period and is more intense in flavor due to the gelatin released from the bones. Broth on the other hand is thinner and is often seasoned more with herbs and assorted vegetables.

My homemade chicken broth as I'm calling it actually has some bones and meat so is a happy medium between the two and is my preferred base for most of my recipes. Per tasteofhome.com it is best to use stock for recipes where the liquid is the "star" of the show, such as chicken noodle soup or Chicken and dumplings.

In my culture, yakhni or chicken broth is one of the first things we introduce to babies. Initially we simply spoon the nutritious liquid into their mouth. As they enter different stages of eating solids; vegetables, meat and grains such as rice are added to the broth and pureed to make baby food. All three of my kids would gobble the soup up and to this day love drinking a cupful of the broth.

Growing up, anytime someone was unwell, a pot of this 'yakhni' would go up on the stove and be ready in no time. Soothing for a sore throat and flulike symptoms, to this day the broth brings back the feeling of comfort. Add some beaten egg whites to it and thicken it with some cornstarch and you have egg drop soup. Add some shredded chicken and corn to that and you have chicken corn soup (a Pakistani favorite).

Soon after I was married my mother visited me here in the US. While helping me cook she told me to separate all the chicken wings, neck and odd parts of a chicken that don't taste good in a curry and put them aside to make chicken broth. These have the perfect combination of meat, bones and fat from the chicken skin to make a good broth. This has been my way to cook broth since that day 24 years ago! 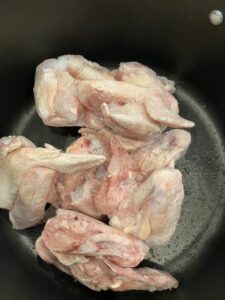 I use very few ingredients to make my broth as I like the broth to have a mild flavor. It's soothing to drink when unwell and a perfect base for recipes where you want it to gently enhance the flavor of what you're cooking.

Onion, garlic and celery are my preferred vegetables to use. Many people add carrots but I find they make the broth a bit sweet and I prefer mine saltier. 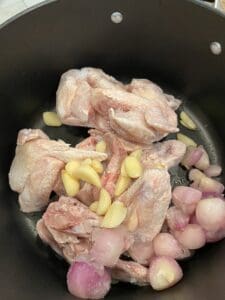 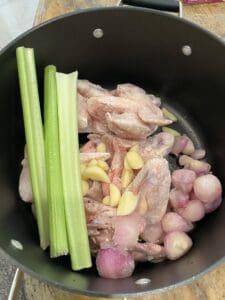 Many recipes for broth don't have any salt in them as it's added to the actual recipe later. I like to add just a little bit to flavor my broth, but 1 teaspoon in the quantity of liquid below will not affect any recipe I subsequently use the broth for.

When cooking chicken I separate the wings and assorted pieces I don't what to use in my curry and freeze them in a ziplock bag. Once I have about 2 pounds worth (usually after 4-5 chickens cooked) I make the stock. If I don't need it right away I freeze it to use later. I shred as much of the meat as I can and use it in the soup itself or save it and use it in another recipe later. 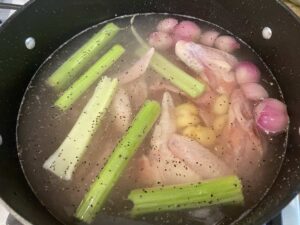 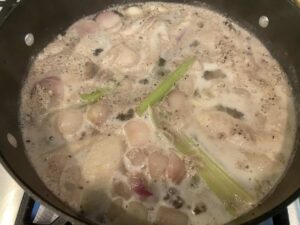 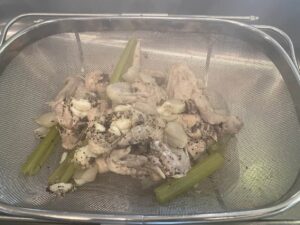 Similarly, when cooking goat meat, I separate the ribs which are small and have little meat on them. The bones and fat on them make an excellent broth as well. I cook this a little bit longer, about 4 hours as goat meat is different and requires a longer cooking time. The rest of the ingredients and recipe is the same as that listed below. This broth is great for adding to rice dishes like pulao or even plain boiled rice cooked in the broth versus water tastes much better.

I hope you decide to try your hand at this soup! Please don't forget to rate the recipe by clicking on the stars below!