"You don't have to look far to taste some of the best food the world has to offer. I'd pit my grandmother against a 3-star Michelin chef any day". These famous words, stated in greatsayings.net by renowned chef Nadia Giosia, came to mind as I created my Bun Kabab Slider Recipe.

The History Of The Bun Kabab

The original Bun Kabab, created by Haji Abdul Razzak in 1953 served as a solution to the growing lunch needs of the busy workforce in a rapidly growing city. The burger style sandwich fit the bill and 69 years and three generations later, the original street stall created by Haji Razak still stands on Burns Road in Karachi.

What Is The Bun Kabab ?

A bun kabab is nothing more than a simple potato and lentil patty, coated in egg and shallow fried. The patty is then topped with two chutneys, some sliced onions and squeezed between a soft, sweet bun.

Many variations of the original creation exist today as there's a street stall on virtually every corner of the country. Each vendor has his own secret recipe for the patty and the chutneys.

Some use a meat patty, some use one chutney, some two. There's an assortment of toppings, from onions to cucumbers and at times tomatoes. Some coat the patty in egg and some fry the egg separately and top the patty with it.

I hope you try and like my version of the famous street food!

The best lentil to use for the bun kabab is chana dal (split chickpea). SInce it has a firm texture it keeps the kabab from breaking. It's important not to overcook the lentils too much as the patties won't form properly if you do. For best results, soak the lentils overnight and then cook for a short period. The soaking softens them and insures that they will cook quicker.

Cook the onions, ginger, garlic and lentils together with just a little bit of water. As soon as the mixture reaches a boil, cover the sauce pan with foil and reduce the flame to its lowest setting. The rest of the cooking will take place via steaming, as this helps retain maximum flavor.

Since the potatoes and lentils are different in consistency they need to be separately prepped. The potatoes must be boiled, peeled, and mashed by hand as using the food processor makes them too pasty. The lentils are boiled as instructed above and then added to a food processor along with the onions, garlic, ginger and spices and pureed.

The potatoes and lentils are then mixed by hand and formed into the patties, ready to be fried!

Some versions of bun kabab have a separately fried patty and a thin omelette on top. I coat my kabab in hand beaten eggs to give them a slightly crispy coating and to prevent them from falling apart. Any residual egg (as seen in the picture below) is added to the buns along with the patties. I find that this is less labor intensive than cooking the two separately.

Authentic street style bun kebabs are made with very soft and slightly sweet buns. I use potato buns as they have the exact same taste and texture of the ones I remember from back home.

Once the patties are almost done I place the buns face down on the frying pan as shown below. Toasting them this way makes them taste amazing as the residual grease in the pan gives them a buttered flavor. The buns are ready to be assembled once they turn light brown and crispy on the inside.

I chose to make my bun kababs into sliders, but you can just as easily opt to make full sized ones. For the chutneys I used my green coconut chutney and my sugar free imli tamarind chutney. Just smear some of each type directly on the buns, place the fried kabab, some onions and you're ready to eat!

I don't like to add cucumbers or tomatoes to mine as I feel they get a little soggy this way but feel free to chose your own toppings. 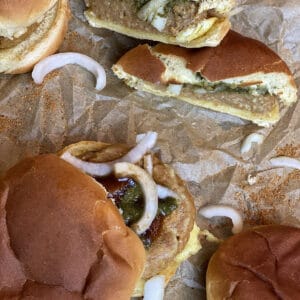