This Mardi Gras Orange Pound Cake has the delicious buttery taste of a traditional pound cake with hints of orange. Decorated to represent the popular carnival season of the Southern United States, called Mardi Gras, the cake delights both the eyes and the palate.

What Is Mardi Gras ?

Per history.com Mardi Gras is a Christian holiday celebration that takes place the day before Lent begins. Mardi Gras means Fat Tuesday, an apt name as it's the last day for many to eat, drink and be merry before the start of Lent.

Throughout all of the Southern states along the Gulf Coast of Mexico Mardi Gras celebrations begin on January 6th of every year and end on Fat Tuesday. Four to Six weeks of lavish balls and fun parades take place all the way from New Orleans to Alabama.

January 6th is known as Epiphany, Kings day and also Twelfth night according to neworleansshowcase.com. It marks the day the Magi came to present baby Jesus with gifts.

The Significance Of King Cake

As such, King Cakes are an important part of the Mardi Gras celebration. They honor the three Kings with their oval shape that represents the Unity Of Faiths. The 3 colors used in decorating the cake represent justice(purple), faith(green) and power(gold). With a baby Jesus hidden inside the cake, the symbolism is complete.

The Baby In The King Cake

Finding the baby in your slice of the cake represents good luck and here in the South it also means you have to provide the next cake. Various groups in schools and offices kick off the Mardi Gras Season by bringing a cake for their group and starting the King Cake chain.

The traditional King Cake is a cinnamon dough rolled and baked in an oval,  drizzled with a sugar icing and sprinkled with colored sugar. Over the years assorted fillings have been added to the cake, such as strawberry, custard, cream cheese and so forth.

Bakeries and supermarkets are stacked with boxes of the colorful king cakes and many local businesses have their own signature versions of the sweet offering. I'm presenting my version of a Mardi Gras Cake that you're sure to love!

Orange cakes seem to be really popular this winter season and although initially unsure if I'd like an orange flavored cake I decided to jump on the bandwagon and attempt one myself.

I ABSOLUTELY LOVE IT !!!

This cake doesn't have a very strong orange flavor, you get just a hint of the orange taste at the end but it really pairs well with the buttery taste of a pound cake.

Growing up in Pakistan pound cake came in the form of a tiny loaf, with a slightly greasy brown paper stuck to the bottom of it that is peeled off before eating. Available at all neighborhood bakeries, of which there are plenty, it's the most delicious thing to have with a cup of tea.

That's the taste I was aiming at in this recipe and when my kids told me it tasted just like the one from the bakery in Lahore (my parents house) I knew this was my recipe for life!

I thought this was the perfect choice for my Mardi Gras Cake! Staying with the symbolism of a king cake I baked it in a Bundt Pan in order to get that round circular shape. I managed to find a pan with a fleur-de-lis symbol, which I felt was also in keeping with the theme of this cake.

The fleur-de-lis is a symbol associated with the French Monarchy and can be seen everywhere in New Orleans due to its French heritage. Drizzled with just a little sugar icing and sprinkled with the traditional Mardi Gras colored sugar this cake is definitely fit for a King!

Traditional Pound Cakes were made with exactly 1 pound of just 4 ingredients; flour, butter, eggs and sugar. These cakes were very dense as there was no leavening agent such as baking powder in the recipe. This recipe and most modern pound cakes are a lot more moist due to a slight change in the ratios of these 4 ingredients as well as the addition of a few others.

I personally use a generous amount of leavening agent in most of my baked goods such as my low carb zucchini bread, my lemon-swiss-roll and my spice cake with orange creme anglaise. I feel this is essential to a soft fluffy texture that I personally like in my cakes. If you want a slightly more dense cake, just reduce the baking powder or soda by a small fraction.

Here is the recipe, hope you decide to try it and please don't forget to leave a star rating if you do!

Please read the notes at the end as they will help you understand the recipe better! 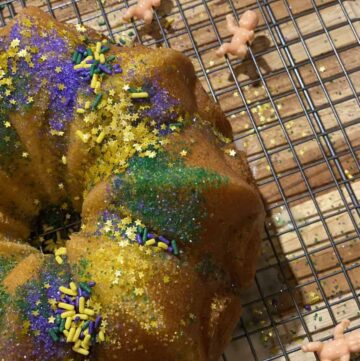 If you're not making this for Mardi Gras some options for decorating are:

The options are limitless! Where cooking is concerned just let your imagination run wild!