This potato cutlet recipe is a childhood favorite. A carb loaded delight that's a popular appetizer, side and snack in Pakistan. If I could I would eat it every day but alas my genealogy doesn't allow me to eat too many carbs! I use the month of ramadan as an excuse to indulge in all my favorite fried and greasy treats and then call it a year! well...for the most part!

Bisma Tirmizi in her series "Food Stories" in dawn.com writes of the coming of the potato to the subcontinent in the late 18th Century. Per her account, the South Asians immediately took to the delightful vegetable, pairing it with tangy spices like mustard and cumin seeds. By the late 19th Century potatoes had taken over the region and were showcased in many recipe creations.

One of the most popular ones was a vegetarian version of the traditional meat cutlet. The meat cutlet known as "Cotelette"refers to thinly sliced meat that is breaded and fried. The term cutlet is traditionally used to refer to a patty made with a mix of potato and some form of meat. The purely vegetarian version on the other hand is referred to as aloo ki tikki. In my house both types are generically referred to as cutlets.

My favorite cutlets of all time are my grandmothers meat filled ones. Spicy cooked ground beef is surrounded by mashed potatoes in an oval shape, breaded and fried. Much as I love them they are time consuming to make so I usually stick to these vegetarian ones instead. I often pair them with my tawa fry beef keema, finding that a lot easier than stuffing each individual one with the ground beef.

The recipe for the cutlets is fairly easy but here are a few pointers to help you along the way : 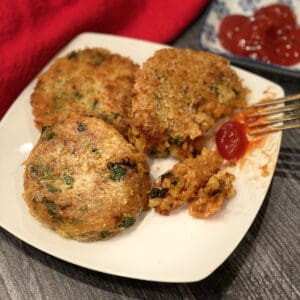 Red Potatoes I find red potatoes to be the best for the cutlets as they're firmer than some of the other varieties such as golden or russet. This helps the patties stay together and not crack. Salt Taste a little bit of the potatoes to adjust the seasoning to your personal taste. Red Chili Powder As always, being from Pakistan, my food tends to be a bit on the spicy side. If you aren't used to spices then add half the amount of chili powder the recipe states and adjust after tasting. Serrano Chillies Serrano Chilies are my personal favorite but if you like things less spicy substitute with 1 jalapeno. If you like things really hot then go with 4 thai chillies instead. Cooking Oil ½ cup of oil may seem like alot but the panko crumbs will absorb a considerable amount and in order for the cutlets to be crispy on the outside this is the minimum you will need.